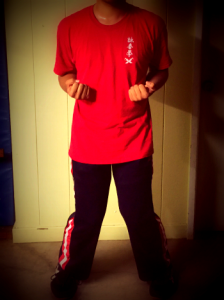 What is so good about the Wing Chun Stance? I believe the people who don’t understand the stance, don’t appreciate how simple and sophisticated the stance is.

It is always difficult for me talk certain Wing Chun concepts without mentioning Wong Shun Leung. In Sifu David Peterson`s book , Look Beyond The Pointing Finger, Wong states,”Although Strong in structure, the stance is not rigid as some people believe,but extremely flexible when understood by properly trained Practitioners.” There are many details that Wong goes through and he goes on,”The basic stance is , by nature , deliberately unstable, so that one instinctively learns to collapse into a safer more serviceable stance, if challenged by a strong attack. This is a far more sensible way ,then dealing with a stronger opponent head on.”

The “Yi Ji Kim Yeung Ma or Goat Gripping Stance” , when first seen , by me , as a young Wing Chun Do practitioner and even later as a JKD practitioner , I couldn’t appreciate the logic of the Wing Chun Stance. Like everyone else, I was quoting Bruce Lee or repeating what someone else said without investigating for myself . I believe that even after years of training, myself included , I never understood the importance of maintaining the integrity of the stance.
Later , I found that , keeping the hips pressing forward, squeezing the knees and butt, became natural. Also later I found , even in other styles, a lot of the same concepts where employed although not as direct as Wing Chun .

As one progresses through Wing Chun and is mindful of what is going on internally , you react to actions without thought. Every response you make will be the result of your body coordinating with your mind in one sequence of events, resulting in your favor. If one trains superficially and does not take the time to explore and understand, you are training to become a replicant and not your own person.